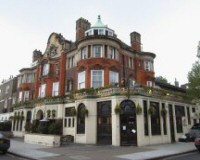 Rule Brittania in The Dove», 3.5km