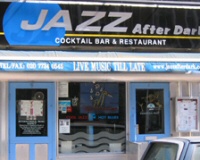 Jazz after Dark has also had its fair share of well known visitors, Greta Garbo was one of the first to dine here when she visited London in the eighties. Charlton Heston, Bill Murray & Alison Moyet were amongst some of our late night jazz lovers.

Pete Doherty & The Libertines performed here in their early days, while Amy Winehouse is also a regular here she often makes a surprise visit and sings with the band.

Lost in the Supermarket», 3.1km

Libertines Up the Bracket Video», 3.3km