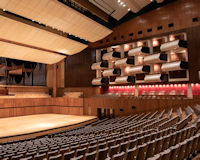 This is one of the premiere concert halls in the UK.

Description: The Royal Festival Hall is a 2,700-seat concert, dance and theatre venue within the Southbank Centre in London.

The hall was built as part of the Festival of Britain for London County Council, and was officially opened on May the 3rd 1951. The foundation stone was laid in 1949 by Prime Minister Clement Attlee on the site of the former Lion Brewery, built in 1837.

It was officially opened on May the 3rd 1951 with a gala concert attended by King George Vl and Queen Elizabeth.

One of the young designers Leslie Martin, described it as The suspended auditorium provides the building with its major attributes: the great sense of space that is opened out within the building, the flowing circulation from the symmetrically placed staircases and galleries that became known as the 'egg in the box'

It is a Grade I listed building, the first post-war building to become so protected (back in 1981).

A large head and shoulders bust of Nelson Mandela (sculpted by Ian Walters in 1985, first in glass-fibre then bronze) stands on the walkway between the hall and Hungerford Bridge approach viaduct.

This is where David Bowie lived», 0.8km