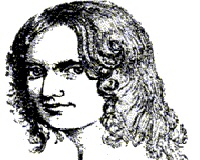 Description: William Bridges Adams (1797-1872), railway pioneer who invented the railway fishplate and in someplaces credited with the original idea for the Crystal Palace; lived here.

He was married to Sarah Flower Adams (1805-1848) the famous hymn writer (or hymnodist!) who wrote Nearer My God to Thee (pictured).

The Sunnybank house was designed by famous architect James Cubitt in 1889 but now divided into 2 houses. There was an earlier house here dating from 1715.