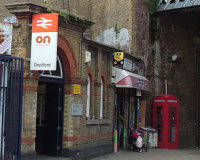 Description: This station came into existence when the London and Greenwich Railway opened its first section between Spa Road, Bermondsey and Deptford on 8 February 1836; the line was extended eastwards to a temporary station at Greenwich on 24 December 1838.

Spa Road closed when London Bridge opened making Deptford Station the oldest London station still in use. It probably has one of the ugliest plaques in London commemorating this fact.