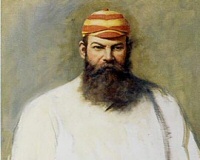 Description: W.G. Grace (1848-1915) lived here in Mottingham from 1902-1915. He was a cricketer for Gloucestershire, London County and England, he was a dominant player and personality of his era, with an extraordinary record of achievements.

Born at Bristol, he qualified as a doctor and was a member of a remarkably gifted cricketing family (his brothers Edward and George Frederick were also Test players). He began his first-class career in 1865, played for 43 years and made his last Test appearance aged 50. A large, bearded man, Grace was the finest all-rounder in an age of many notable cricketers.

He played in the first Test match ever held in England against Australia at the Oval in 1880 and made 152, the first Test century by an English batsman.

W.G. Grace was also a fine lawn bowls player and in 1903 became the first president of the English Bowling Association.

He is buried in Elmers End cemetery. The W G Grace Inn was named after him at Elmers End Road, Anerley.