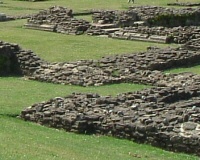 The ancient 12th century ruins of this illustrious abbey.

Description: Lesnes Abbey was founded in 1178 by Richard de Luci, Chief Justiciar of England and was dedicated to St Mary and St Thomas the Martyr. De Luci, who had supported Henry II in his dispute with Thomas Becket, which ended with Becket's murder in Canterbury Cathedral in 1170, probably founded it as an act of penance. In 1179, de Luci resigned his office as Chief Justiciar and spent the last three months of his life in retirement at the Abbey. He was buried in the chapter house.

Lesnes Abbey belonged to the order of Augustinian canons whose duty it was to 'baptise, preach, give penance and bury the dead.' The original canons at Lesnes were drawn from the priory of Holy Trinity, Aldgate.

Lesnes was not a large or wealthy foundation. Throughout much of its existence, the Abbey was in financial difficulties. This was partly caused by the expense of maintaining the river walls and draining the marshes along the banks of the Thames. This reclamation helped transform the land from unusable marsh to valuable pasture. Nevertheless, the Abbey gradually built up debts and through the fourteenth century its buildings fell into neglect.

Rebuilding in the early sixteenth century came too late. In 1524, Henry VIII's chief minister, Cardinal Wolsey, obtained permission from Pope Clement VII to close all monasteries in England and Wales with less than eight inmates. The revenue raised was intended to finance Cardinal Wolsey's College at Oxford. Lesnes, with only an abbot and five canons, became one of the first monasteries to be suppressed in England.

After Wolsey's fall, Lesnes met the fate of monasteries throughout the country after the dissolution its monastic buildings and land passed into the King's hands, later to be sold to wealthy laymen. Occasionally a monastic church would be preserved as a parish church (Waltham Abbey, for example); more usually the new owners partly or wholly demolished the monastic buildings for materials. Some were converted into fine country houses or large farmhouses. The Abbot's Lodging was often particularly suitable for conversion.

At Lesnes, although most of the monastic buildings were pulled down soon after the dissolution, Henry Cooke, who acquired the site in 1541, retained the Abbot's Lodging as a mansion house of the manor of Lesnes. The Abbey site later came in to the possession of Sir John Hippersley, who had it dug over for building materials. He then sold it in 1632 to Thomas Hawes of London who bequeathed it to Christ's Hospital in 1633, in whose possession it remained until 1930, when the London County Council purchased it. In 1931 Lesnes Abbey was opened to the public as a park and since 1986 the site has belonged to Bexley Council.