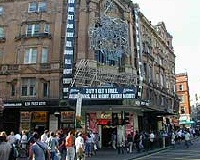 The famous club hosted the 1st ever jazz show in Britain.

Description: The London Hippodrome was built in 1900 by Frank Matcham for Edward Moss as a hippodrome for circus and variety performances, including large water tank for aquatic spectacles. It was reconstructed by Matcham as a music-hall and variety theatre with c. 1340 seats in 1909 and it was here that Tchaikovsky's Swan Lake was first danced in England by the Russian Ballet in 1910.

It was here that the first ever jazz performance in Britain took place. On 7th April 1919 The Original Dixieland Jazz Band played.

It's only open for private hire at the moment.