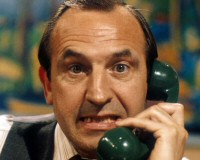 The station comedy legend Reggie Perrin would go to work from.

Description: At the heart of West London's commuter belt, Norbiton Staion was famously used as a location for the British sitcom The Fall and Rise of Reginald Perrin starring Leonard Rossiter.

Every day Reggie would trudge to work here, sit opposite the same annoying chap on the same train. The futility of it all!

Reggie's home town in the series was actually called Climthorpe.

Cooper always won them over», 17.km

The Goons and Finnegan», 8.7km