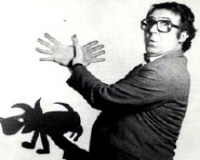 The boat pub that Malcolm Hardee fell overboard from.

Description: This fabulous boat pub is probably one of the shabbiest, noisiest and best pubs to include at the end of a pub crawl.

Comedien and the father of alternative comedy Malcolm Hardee (1950-2005) was running the pub when he fell into the Thames and drowned. Hardee was best known for running some of the toughest clubs in London, especially the notorious Tunnel Club at Rotherhithe.

As a performer, he was known for getting naked at every opportunity. He was the founder of the Greatest Show On Legs balloon dance troupe, and used to do a unique impression of Charles De Gaulle, using his penis as the nose.

At one point actor Keith Allen played keyboards on quiz nights. It's true.

1» Not only is the Wibbley Wobbley a lovely place for a pint they do great grub as well. Nothing fancy but really well prepared. Dont go there if you want a poncy little pile of leaves with a sliver of protein on the top. If you want a big plate of steak & kidney pie or a fantastic roast Sunday lunch, this is the place to go. (Bill Mertin)
Posted by Bill Mertin on 2008-05-16