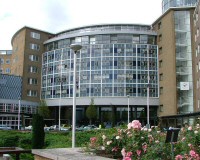 This is where the BBC television programmes are made.

Description: This is the home of the BBC's Visual Output. The many studios here have been used to film many of the BBC's TV shows from Costume Dramas, to Comedies to Top of the Pops in it's later years. Across the road (over the tube tracks) are the Drama labs where many celebs went to read scripts and prepare shows.