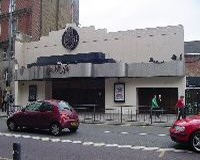 The venue immortalised in Clashs White Man At Hammersmith Palais

Description: The Hammersmith Palais de Danse, the popular English club, was immortalized in The Clash classic, (White Man) In Hammersmith Palais, a reference to the days when reggae performances were popular at the establishment, and is heralded by many fans as one of their band's more mature and stylistic tracks.

The club opened in 1919, where it served host to a plethora of the time's best jazz bands, and in the 1930's was converted to an ice skating ring and home to an English hockey team.

In recent years, the venue has also been used for private events, a dance club, and continued live concerts for bands such as U2, The Rolling Stones and The Sex Pistols.

It has recently sadly been condemned for demolition.

Hammersmith and Fulham councillor Lucy Ibimy says, We recognise the contribution the Palais has made to the west London music scene, but the golden days of the club are long gone.