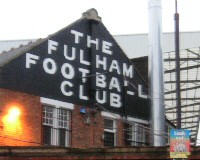 The oldest football stand in London is at Craven Cottage.

Description: The original 'Cottage' was built in 1780, by William Craven, the sixth Baron Craven and was located on the centre circle of the pitch. At the time, the surrounding areas were woods which made up part of Anne Boleyn's hunting grounds.

Several other sports are presumed to have taken place here besides hunting. As well as more lethargic games such as lawn bowls and croquet, a version of the Aztec game called 'tlachtli' (scoring a ball through a hoop using your hips) is alleged to have been played here. This game is thought to be a distant cousin of association football and is arguably one of the earliest codes of organised football.

The cottage itself was lived in by Edward Bulwer-Lytton (author of The Last Days of Pompeii) and other noteworthies until it was destroyed by fire in May 1888. Many rumours persist between Fulham fans of past tenants of Craven Cottage; Sir Arthur Conan Doyle, Jeremy Bentham, Florence Nightingale and even Queen Victoria.

Following the fire, the site was abandoned until Fulham FC settled here in 1886 after having 8 previous homes.

The ground's first stand was built shortly after, described as looking like an 'orange box', it consisted of four wooden structures each holding some 250 seats, and later was affectionately nicknamed the 'Rabbit hutch'.

In 1905 a scheme costing a record Â£15,000, built a new pavilion (the Cottage itself) and a stand built, in his characteristic red brick style.