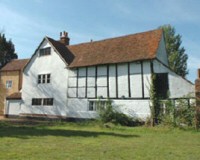 This splendidly moated manor house has timbers dating to 1320's.

Description: Now home to the Harrow Museum, this medieval estate features a fully moated manor, several timber barns and farmland. It was owned be various wealthy landlords until 1928 when it was bought by the local council.

Records of the Manor go back to 825 AD. The name Headstone dates to 1233 or earlier.

This special site has buildings which have survived virtually intact from medieval times to the present day.

Today the buildings are listed by English Heritage and are used for education, entertainment, community projects, collections care and exhibitions. Further, work has begun to restore the very important 14th century Manor House. The Manor House was home to Archbishop Cranmer and is Grade 1 listed, the earliest parts dating from the 14th century.

A particular feature is the timber-framed, aisled hall, originally built for the then Archbishop of Canterbury. Additions were made from the 17th century onwards. The ancient parts have survived remarkably well, but await substantial repair.

The Tithe Barn is a Grade ll listed building. In 1506 the cost of making the barn came to 20. Extensively restored in the 1970s, the true magnificence of the timber framed structure is revealed inside.


The Moat is the only water-filled moat in Middlesex; it was a status symbol for the owners and is contemporary with the Manor House.

The Small Barn is Grade ll listed, with an information display and scale models that explain the Headstone Manor site. Built in the 16th & 17th centuries the Small Barn was used for stabling and storage until 1928.