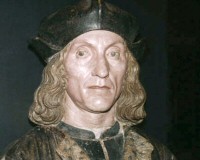 Description: The Lady Chapel was begun in 1503 and constructed at the expense of Henry VII. It is the last great masterpiece of English medieval architecture. In 1545 John Leland called it the wonder of the entire world.

The chapel is approached by a flight of stairs and at the entrance are finely wrought bronze gates displaying royal Tudor emblems.

Around the walls are 95 statues of saints. Behind the altar is the tomb of Henry VII and his queen Elizabeth of York. The bronze screen around it is by Thomas Ducheman and the gilt bronze effigies and Renaissance tomb were designed by Italian Pietro Torrigiano. James I is also buried in the vault beneath the monument.

Peitro Torrigiano was from Florence where he studied under Lorenzo the Magnificent. A friend of his Cellini said that Torrigiano once hit Michaelangelo so hard upon the nose once that he inflicted injury which remained visible throughout the artist's life. He is thought to have lived on old London Bridge at one point. He once referred to the English as 'bears' and 'beasts'.

Religious Phrase With A Twist», 0.0km

The Church of the Good Shepherd», 5.7km