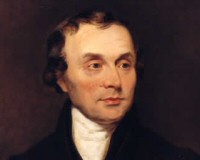 The Godfather of the Clouds, Luke Howard lived here.

Description: In April of 2002, the British Meteorological Office honoured the memory of Luke Howard (1772-1864) by posting a plaque at the north London home here where Howard spent his final years.

Stratus (Latin for layer) A widely extended horizontal sheet, increasing from below.

Cirrus (Latin for curl of hair) Parallel, flexuous fibres extensible by increase in any or all directions.

To denote a cloud in the act of condensation into rain, hail or snow, he added a fourth category:

Nimbus (Latin for rain) A rain cloud -- a cloud or systems of clouds from which rain is falling.

According to Howard: While any of the clouds, except the nimbus, retain their primitive forms, no rain can take place; and it is by observing the changes and transitions of cloud form that weather may be predicted.

Clouds could also alter their forms, thus, Howard reasoned, when cumulus clouds bunched together so that they crowded the sky, they became:

Cumulo-stratus: The cirro-stratus blended with the cumulus, and either appearing intermixed with the heaps of the latter, or super-adding a widespread structure to its base.

Howard's work made a big impression on those interested in the sky, particularly after his papers were reprinted in Thomas Forster's successful Researches About Atmospheric Phaenomenae in 1813. The classification system quickly gained wide acceptance both in Britain and other countries. Among its biggest supporters was the German poet, philosopher and scientist Johann Wolfgang von Goethe. Goethe used the Howard classification in his weather journals and eventually dedicated four poems to Howard and his Clouds.

[Howard] was the first to hold fast conceptually the airy and always changing form of clouds, to limit and fasten down the indefinite, the intangible and unattainable and give them appropriate names.