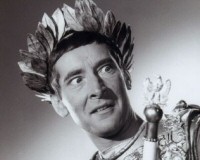 This is where Carry On comedy legend Kenneth Williams was born.

Charlie was pleased to have a boy who he could take to football matches or enjoy a pint with in the pub. As things turned out, however, Ken was never that kind of son and as a consequence, the two never really got on.

Kenneth Williams was an English comic actor, the star of twenty six baudy English Carry On... comedy films and notable radio comedies with Tony Hancock and Kenneth Horne, as well as a witty raconteur on a wide range of subjects.

Cooper always won them over», 5.9km