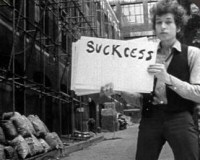 Description: The famous 1965 video for Bob Dylan's Subterranean Homesick Blues was filmed in the tiny street at the back of The Savoy Hotel here after he and Donovan had sat up all night writing the caption boards!

The cue cards were written by Dylan himself, Donovan, Allen Ginsberg and Bob Neuwirth. While staring at the camera, he flips the cards as the song plays. There are intentional misspellings and puns throughout the video, for instance when the song's lyrics say eleven dollar bills the poster says 20 dollars. Ginsberg and Neuwirth make a cameo in the background.