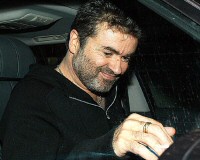 This is where George Michael was found out cold at the wheel.

Description: This is where George Michael was arrested in October 2006 for possessing cannabis after being found slumped at the wheel of his car for the second time this year.

The troubled singer was rushed to hospital after officers found him unconscious in his Mercedes at the busy junction here near his North London home just after 3.20am yesterday morning.

They also discovered a small amount of cannabis in his possession.

Police were called to the scene after receiving reports that his car was obstructing the junction here at Cricklewood Lane with Hendon Way, under a mile away from Hampstead Heath.

The 43-year-old star was later taken into custody at Colindale police station in west London, and booked under his real name Georgios Kyriakos Panayiotou.

As well as being cautioned for possessing cannabis, Michael was arrested under the suspicion of being unfit to drive and released on police bail yesterday afternoon.

It is the third time this year the star has been involved in a motoring incident, which many believe is linked to his frequent use of cannabis.

The former Wham frontman was cautioned in February for possession of the class C drug after being found asleep at the wheel of his parked Mercedes near Hyde Park.