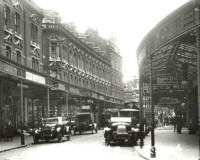 The first ever shopping area with electric lights.

Description: This was the first electric shopping area in London, built in the 1880s and now host to Brixton Market.

Electric Avenue inspired the name of Eddy Grant's #2 hit of 1983 from the album Killer on the Rampage. The song describes the problems in the world as seen by Eddy Grant.

In April 1999, a homemade nail bomb exploded in the market, injuring 48 people, including a security guard who was trying to move disbelieving shoppers and a 14-year-old boy who picked the bomb up and carried it away from the crowds. The bomb was one of three detonated by far-right extremist David Copeland in attacks aimed at London's black, Asian, and gay communities.