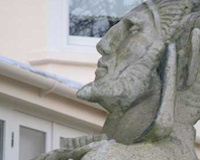 Description: While living here sculptor Gilbert Bayes (1872â1953) was at the height of his career and completed some of his best-known works, including Queen of Time (1931), the female figure which supports the great clock on the Oxford Street faÃ§ade of Londonâs famous department store, Selfridges.

Bayes also lovingly introduced his sculptures as decorative additions to his home, although many of these have since been stolen, some remain.

An embellishment above a side window and a solitary statue, Great Pan (1929), in the rear garden act as a reminder of the creative environment in which Bayes lived and worked.

A blue plaque was unveiled here in 2007.