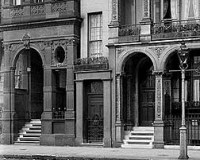 The smallest house in London, only 3 feet wide at its smallest.

Description: Now part of Tyburn Convent, this building is 3 feet 6 inches wide. One theory for its existence is that it blocked a public right of way to serve as a watch house overlooking the old St George's graveyard - extremely popular with bodysnatchers in the 18th Century!

With the ground floor consisting of nothing more than an alleyway behind the front door and the first floor just a tiny bathroom.

Lewis Grant Wallace was the first and only tenant. This 3 foot wide house is smaller than most custom closets in homes today. Most people can't imagine living in a space that small.


Granary Square and its Fountains», 2.2km