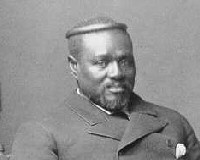 King of the Zulu's lived here in Kensington!

Description: King Cetshwayo (c.1826â1884), King of the Zulus, has today (Monday 30th October), been commemorated with an English Heritage Blue Plaque at 18 Melbury Road, London, W14, where he stayed in the Summer of 1882 following his exile from Zululand. During this time, he met Prime Minister Gladstone and visited Queen Victoria at Osborne House. Although the duration of his stay was short, his visit made a significant political impact - very few African princes, and no other Zulus (save those accompanying Cetshwayo) had visited London at this time.

For many, the Zulu war is remembered as a dark moment in British history â a conflict deemed âunjust and unnecessaryâ by the Earl of Kimberley in 1882. In an interview given while at Melbury Road, Cetshwayo said that he regarded the war as âa calamity.â However, the dramatic story of King Cetshwayo â dethroned, imprisoned, and then restored by the British Empire - remains the subject of exceptional interest and sheds crucial light on the late nineteenth-century history of this country.

Cetshwayo kaMpande (also known as Cetewayo or Ketchwayo, meaning âthe slandered oneâ) was born around 1826, the son of Zulu prince Mpande and Ngqumbazi, a member of the Zulu aristocracy. From the moment of his birth, Cetshwayo was immersed in war and bloodshed â his uncle Shaka, a renowned commander who had led the Zulus to a position of dominance in south-east Africa, was assassinated in 1828 by his brother Dingane. Aware of the threat to his own family, Mpande moved to a defensive position, and in 1839 â 40 successfully removed his brother from power. In 1840 Mpande was declared King of the Zulus, and Cetshwayo became heir to the throne.

In the following years, Cetshwayo steadily gained in influence and importance but was increasingly threatened by his younger brother Mbuyazi, supported by their father. Conflict was inevitable â in the ensuing battle of Ndondakusuka, Mbuyazi was dramatically defeated by Cetshwayo and for the next 15 years he controlled the nation. After the death of his father in 1872, Cetshwayo came to the throne and an official coronation ceremony took place in the following year.

During this period Zululand was repeatedly invaded by Boers from the South African Republic, eager to occupy the Zuluâs fertile territory â the arrival in 1877 of Sir Henry Bartle Frere, Govenor of the Cape Colony, was a direct threat to Zulu independence. As the most powerful native ruler in the area, King Cetshwayo was regarded with grave suspicion by Frere, and the British increasingly interfered in his rule.

Despite Cetshwayoâs reluctance to engage in conflict, war was inevitable and a substantial British force under Lord Chelmsford entered Zululand in January 1879. The ensuing campaign saw the worst British defeat at the hands of an indigenous opponent when the camp at Isandhlwana was attacked by 24,000 Zulu warriors. The stand at Rorkeâs Drift helped to salvage Chelmsfordâs fortunes and Cetshwayo was taken prisoner in July 1879. He was exiled from Zululand and the nation was divided into thirteen independent chiefdoms under the authority of the British.

For the following three years, Cetshwayo was held captive in Cape Town and it was during this time that rumours began to circulate that the ex-King would be allowed to visit Britain. The potential visit was hotly debated in Parliament â what was its purpose, and would, as the Earl of Carnarvon suggested, the visit lead to âgreat public inconvenience and considerable riskâ? The Earl of Kimberley strongly defended Cetshwayo, regarding him as a âremarkable manâ with ability and âgreat influenceâ. And so, on the 4 August 1882, Cetshwayo arrived in England, and stayed for nearly one month. Following meetings with Queen Victoria and Gladstone, his return to Zululand was agreed â Cetshwayo had made it clear that this outcome was the purpose of his visit to England, reasoning that his people wanted him and that there would be war if he was not restored to the throne.

Cetshwayo was returned in secret to Zululand in January 1883, but, greatly weakened in authority, he was unable to prevent factional fighting turning into a gory civil war. Cetshwayo and his fifteen year old heir, Dinizulu, were forced to seek refuge in a reserve controlled by the British. Cetshwayo died on 8 February 1884 â although officially recorded as a heart attack, some suspected poisoning. Two months later, Dinizulu was proclaimed King.