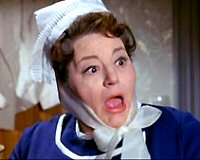 The former home of Hattie Jacques and John Le Mesurier

Description: This is the former home of the Carry On star Hattie Jacques, and now it's a free museum. Jacques lived here since 1945, sharing it with her husband, Dad's Army star John Le Mesurier, until her death in 1980.

School to an Eccentric Comedian», 3.9km

Downstairs at the King's Head», 6.8km