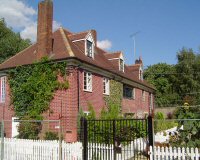 This is where the Channel 4 big breakfast house used to be.

Description: The show was launched by then unknowns Chris Evans and Gaby Roslin, who have gone on to enjoy great success in other TV and radio ventures.

But presenters Richard Bacon, Amanda Byram and Mike McClean saw ratings slump to 250,000 towards the end of its 10-year run and the show was finally axed.

There had been rumours that the show's founder Bob Geldof would blow up the house on the final day.

Instead, the show's presenters signed off with a song and computer tricks were used to make the lock-keeper's cottage look like it had disappeared.