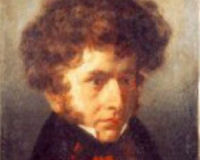 The location of the infamous meeting between Wagner and Berlioz.

Description: This is the house where Prosper Sainton lived; Hector Berlioz had dinner with Wagner here around 16 June 1855.

Sainton, a Frenchman from Toulouse, was a distinguished violinist; who had married an English singer and lived here.

The two attended some of each otherâs concerts and met a few times, the most celebrated occasion being that of 16 June 1855.

On 25 June Berlioz wrote to Liszt about Wagner:

Wagner and I talked a great deal about you these days, and you can well imagine in what affectionate terms â I promise you, I believe he loves you as much as I do. He will probably tell you about his stay in London and everything he had to suffer because of preconceived hostility. He has magnificent fire, warmth and generosity, and I confess that even his violent outbursts carry me away. It seems that Fate is conspiring to prevent me from hearing any of his latest compositions. The day when he conducted his overture to TannhÃ¤user at Hanover Square Rooms, at the request of Prince Albert, I was at the same time obliged to attend a dreadful choral rehearsal for the concert of the New Philharmonic which I was to conduct two days later. [...] Despite a few genuine absences in the orchestra the first two pieces of RomÃ©o went well. The FÃªte chez Capulet was even played with such verve that for the first time since this symphony exists it was encored to great applause from the vast audience in Exeter Hall. There were many mistakes in the Queen Mab Scherzo. [...] Wagner finishes on Monday with those of Hanover Square, and he will hurry away the next day. We are dining together before his concert. There is something singularly attractive about him; we may both have our asperities but at least they dovetail together.

Wagner also wrote to Liszt on 5 July and gave his account of the evening at Saintonâs, and his thoughts on Berlioz:

I bring back from London one real gain, the cordial and profound friendship I have conceived for Berlioz, which he reciprocates. I was at a concert of the New Philharmonic conducted by him, and must confess I was scarcely edified by the way he performed Mozartâs G minor symphony. The execution of his Romeo and Juliet symphony was most inadequate and filled me with pity for him. But a few days later we were alone together at Saintonâs. He was in very good form, and I had made so much progress with French since I came to London that I was able to have a lively discussion with him on all kinds of matters relating to art, philosophy and life during the five hours we spent in each otherâs company. The meeting filled me with deep sympathy for my new friend. He appeared to me in a quite different light from before. Each suddenly recognized in the other a companion in misfortune, and it seemed to me I was luckier than Berlioz.