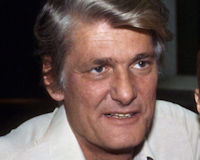 Description: Peter Murray began life as an actor, working on several films before joining the English service of Radio Luxembourg in 1949.

He moved on in 1956 and soon joined the BBC as a DJ on their radio station the BBC Light Programme. Radio turned to TV and stints on Six-Five Special, Juke Box Jury and Come Dancing.

In 1961 he co-starred with Dora Bryan in a TV sitcom about two newly weds called Happily Ever After and he was one of the first regular presenters of Top of the Pops when it first began in January 1964.

He joined Radio 1 on its opening day in 1967 and went on to host his own long-running Radio 2 show, a two-hour magazine show called Open House five days a week.

In latter years, he worked on shows for LBC radio.

Mozzer lives with the Queen», 4.7km