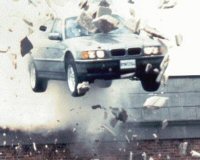 Description: This car park was the setting for the car-chase sequence in the Bond film Tomorrow Never Dies.

One of Brent Cross Shopping Centre's multi-storey car parks was to stand in for the car park in Hamburg where Bond was to use his gadget-laden, remote-controlled BMW to evade a gang of Carver's assassins.

As the car park (levels 4 and 5 of the North car park) was rocked by a series of explosions, one concerned member of the public - not realising what was going on - called for the police and fire brigade!