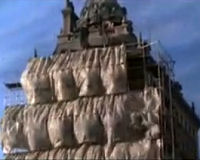 Description: This classic Terry Gilliam sketch was filmed here. It was as a separate film screened at the start of Monty Python's The Meaning of Life.

Film goes like this: The elderly employees of a staid London assurance firm has been taken over by the Very Big Corporation of America. They rebel against their corporate masters when one of them is sacked, and force their boss to walk a makeshift plank out a window, then they commandeer their Edwardian office building and turn it into a pirate ship, sailing through the City of London, they then proceed to attack The Very Big Corporation of America's skyscraper, using, among other things, wooden filing cabinets which have been transformed into carronades and swords fashioned from the blades of a ceiling fan. On ropes, they swing into the board room and engage the executives of VBCA in hand-to-hand combat, vanquishing them.

The building's day job is as the Lloyd's Register Group - a maritime classification society and independent risk management organisation.

It really was Love Actually», 5.3km