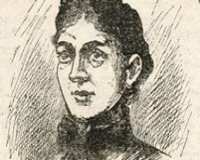 This is where Jack the Ripper's fourth victim was found.

Description: This is the one of the only Ripper murder scenes to retain its name; Mitre Square. St James's Passage, was called Church Passage at the time of this, called the 4th Ripper murder. The passage leads to Duke's Place and further into Aldgate.

Just behind the brick flower planter and towards the fence is the site where Catherine Eddowes was found murdered.

Nearby at around 8.30pm on September 29th 1888 PC Louis Robinson of the City of London Police had arrested local prostitute Catherine Eddowes for being drunk and disorderly and had taken her into police custody at Bishopsgate police station. By midnight she had sobered up and at 1am, just as the body of Elizabeth Stride was being discovered, Catherine was being released from Bishopsgate Police Station. As she left the building she turned to a police officer and spoke her last recorded words. Good night old cock she called and went off into the night.

At 1.45 in the morning of 30th September 1888, PC Watkins of the City Police walked his beat here into Mitre Square. The only sound that he heard was the sound of his own footsteps. Hed passed this way fifteen minutes earlier and found the square to be quite deserted. When the beam from his lantern fell upon the spot in the squares south corner it illuminated a gruesome and horrific sight. The mutilated body of Catherine Eddowes.