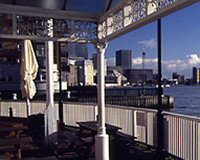 This is the gastro river pub owned by Gordon Ramsay.

Description: This pub is a Grade II-listed building directly alongside the River Thames.

The area, where the Grand Union Canal and the Regents Canal meet the Thames, first became known for its limekilns in the 14th century and in the 1740âs became the site of Englandâs first soft paste porcelain factory. Shipbuilding also thrived in the area from the 16th through to the 19th century.

In 1830, the well-known brewer Taylor Walker began brewing on the site of todayâs Narrow Street pub. The building itself was constructed between 1905 and 1910 by British Waterways as a purpose-built Customs/DockMasterâs house serving the Limehouse Basin.

The building then became a public house, initially called The Barley Mow and later refurbished and re-named The Narrow Street Pub and Dining Room.

In its new form, Gordon Ramsay has created a warm and relaxed environment where the emphasis is on good quality food with real ales and ciders.

A Market going down in History», 7.0km