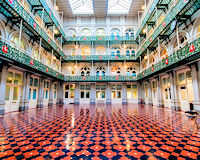 The grand Victorian building celebrating the beer and hop trade.

Description: The Hop Exchange is a Grade II listed building originally opened in 1867 and designed by R.H. Moore to serve as the hub for hop trading in the brewing industry.

Hops were harvested from farms in Kent, and brought by railway to London Bridge Station (or sometimes by boat up the River Thames) and stored in the many warehouses in the Borough area. This building was the market centre for hop trading for breweries.

A glass roof allowed business on the trading floor of the Great Hall to be conducted under natural light.

A terrible fire on October 20th 1920 led to the top two storeys being removed, and the Hop Exchange was then converted into offices.

After the bombings of the wars other exchanges such as Coal, Metal and Stock all closed leaving the Hop Exchange the only one still standing.

The original architecture has been cherished and preserved creating a unique atmosphere. Check out the splendid carvings above the main entrance showing hop gatherers at work.

Also, go and see tte wall of the pub opposite and its inscribed memorial (signed by Omar Ramsden), commemorating the members of the hop trade who fell in the First World War.