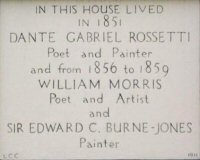 This is where William Morris designed his first furniture.

It was here that Morris first tried his hand at furniture and textile design, producing the first of the medieval-style furnishings which gave rise to the Arts and Crafts movement. Burne-Jones too began to paint the quasi-medieval subjects for which he later became famous.

In 1861 Morris, Burne-Jones and Rossetti set up a design business together at number eight Red Lion Square, to produce high-quality furniture and fittings using traditional craft methods. Their housekeeper, known as 'Red Lion Mary', did much of the sewing and tapestry, and also contributed to some of Morris's designs.