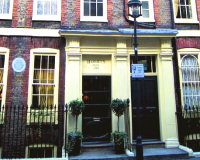 Description: This hotel occupies three historic Georgian houses in Frith Street, leading down from Soho Square. In 1718 there were no elevators. There still arent!

In the summer of 1830, author William Hazlitt lay dying in a small upstairs bedroom at the back of a cheap Soho lodging-house. His first wife Sarah Stoddart, his son William, Charles Lamb and various friends visited him there, as stomach cancer slowly tortured him.

Like Wilde in his Paris pension, he was dying as he had lived, beyond his means; to pay for his last lodging on earth he wrote at least two essays during that tormented summer. One is called The Sick Chamber, and in it we can glimpse the tumbled pillows, the medicine bottles, the juleps in the unwholesome dungeon where he lies.

More than 12 years before, in a little-known letter, Keats's friend, John Hamilton Reynolds, described Hazlitt as full of eloquence,- warm, lofty, & communicative on everything imaginative & intelligent,- breathing out with us the peculiar & favourite beauties of our best bards,- passing from grand & commanding argument to the gaities & graces of wit and humour,- and the elegant and higher beauties of poetry. He is indeed great company.

Keats, who attended Hazlitt's lectures, looked up to him and admired the surging, dolphin-like strength of his passionate prose, also testified to the inspiring greatness of his company. John Clare, too, met and admired him, calling him in a shocked letter written immediately after his death a man of origional [sic] Genius, who died in the character of genius neglected & forgotten.

For many years, the lodging-house where Hazlitt died - his landlady, eager to let his room, hid his body under the bed while she showed it to would-be tenants - has been known as Hazlitt's Hotel.