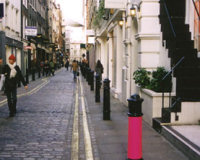 Home of the Speaking Clock», 6.0km