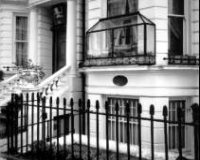 Description: Linley Sambourne House is a unique example of a late Victorian townhouse. Home to the cartoonist Edward Linley Sambourne and his family from 1874, it survives with almost all of its furniture and fittings intact.

In 1874 Edward Linley Sambourne married Marion Herapath, the daughter of a wealthy stockbroker. Helped by Marion's father, the couple paid 2,000 for an 89-year lease on 18 Stafford Terrace. Classical Italianate in style, Stafford Terrace was built in the 1870s as part of the new developments on the Phillimore Estate.

The inhabitants of Stafford Terrace, as listed in the 1871 census, were professional men including retired officers, senior civil servants, tradesmen etc. The arrival of an artist at no.18 Stafford Terrace was a novelty.

The young couple decided to furnish their home in the fashionable 'aesthetic' or artistic style of the period. They lived in the house for the next 36 years and, although they made some alterations, the basic decorative scheme remains the same today.

Linley Sambourne died in 1910 and his wife in 1914. Their only son Roy inherited the house. Though Roy enjoyed the company of numerous pretty actresses, he never married. He made only minimal changes to his parents' house.

When he died in 1946, Roy left everything to his elder sister Maud. She had married Leonard Messel in 1898 and the couple already owned a big house in London and another in the country.

Maud did not need 18 Stafford Terrace, but she had a sentimental attachment to her childhood home. She wanted to preserve the house and its contents and persuaded her daughter Anne to use it as a pied terre during her occasional visits to London from the country.

Anne Messel had married Ronald Armstrong-Jones in 1925. (Their son Antony married Princess Margaret in 1960 and was created Earl of Snowdon.) The Armstrong-Jones's were divorced in 1935 and Anne married Michael, sixth Earl of Rosse. Although 18 Stafford Terrace was never her principal residence, it was the setting for numerous parties whenever she came to London.

At a Guy Fawkes night party in 1957, Anne proposed founding a Victorian Society to encourage the preservation and appreciation of what was then unfashionable art and architecture. A handful of enthusiasts, including Sir John Betjeman and Nikolaus Pevsner, agreed to support the cause.

In 1980 Anne sold the House and its contents to the Greater London Council, and it was agreed that the Victorian Society would run it as a museum. It opened to the public in Autumn 1980.

Following the abolition of the Greater London Council, ownership of the house passed to the Royal Borough of Kensington and Chelsea. 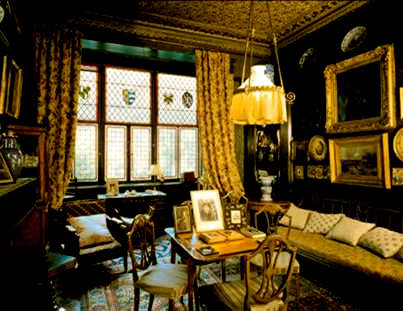