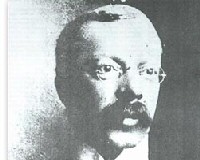 This is where infamous wife murderer Dr Crippen lived.

Description: When Dr. Crippen returned to London from Philadelphia, he and his wife lived here at 34-37 Store Street.

Crippen, who was small in height, left Munyonâs Homeopathic Remedies for a variety of jobs. Some of them failed, and presently he eventually returned to Munyonâs, who had relocated to Albion House, New Oxford Street.

Dr Crippen would later kill his wife in Holloway and try to escape on a ship across the Atlantic to Ontario. The ship received notice of this and he was arrested and subsequently hanged.