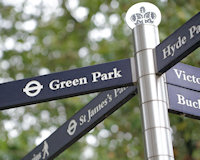 The only Royal Park in London with no buildings or lakes.

Description: Next to Buckingham Palace, The Green Park is one of London's eight Royal Parks and covers an area of just over 40 acres. It was first enclosed in 16th century, and landscaped in 1820 by John Nash and is notable among central London parks for having no lakes or buildings.

The only structures are the Canada Memorial by Pierre Granche, the Diana of the Treetops Fountain by Estcourt J Clack, and the RAF Bomber Command Memorial by Philip Jackson.

On the 10th of June 1840, this was where Edward Oxford's assassination attempt on Queen Victoria took place.

The park was once a duelling ground; one particularly notorious duel took place there in 1730 between William Pulteney, 1st Earl of Bath and John Hervey, 1st Earl of Bristol.

Rumour has it, back in the seventeenth century King Charles II's wife demanded all the flowers be removed from The Green Park after she caught him picking flowers there for another woman. The park still has no formal flowerbeds but is riot of yellow in spring, when around one million daffodil bulbs are in bloom.

The first performance of George Frideric Handel's Fireworks Music was here in Green Park in 1849.

The Birdman of Winchmore Hill», 9.5km