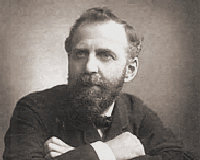 This is where child prostitution campaigner WT Stead lived.

Description: Famed child prostitution campaigner William T Stead lived here from 1904 until his death on the Titanic in 1912.

WT Stead was born in Embleton in Northumbria on 5 July 1849. In 1850 his family moved to Howden-on-Tyne and until the age of 12 he was educated at home by his father, a congregational minister. In 1861 Stead became a pupil at Silcoates School near Wakefield, and in 1863 was apprenticed as an office boy to a merchantsâ counting house on Quayside in Newcastle upon Tyne.

In February 1870 Stead began contributing articles to the âNorthern Echoâ based in Darlington, and in April 1871 was appointed editor even though he had never been inside a newspaper office. In 1873 Stead married Emma Wilson and they had six children together.

The Stead family moved to London in 1880 in order for Stead to take up position of assistant editor to the Pall Mall Gazette, a liberal publication under Viscount Morley. They formed a successful partnership until August 1883 when Morley became MP for Newcastle upon Tyne. Stead took his place as editor and over the next seven years developed a ânew journalismâ. From being a relatively gentile chronicle of events, the gazette became innovative and daring and initiated numerous political and social movements.

Controversy surrounded Stead in 1885 when he published âThe maiden tribute of modern Babylonâ, exposing child prostitution. Stead failed to secure evidence to protect him from prosecution and as a result of civil indictment was sentenced to three monthsâ imprisonment, of which he served two months behind bars.

Stead visited Tsar Nicholas II of Russia in 1898, an encounter which led him to found the âWar against Warâ weekly paper. He led âThe Peace Crusadeâ and preached widely what he described as a âpeace crusadeâ. He was nominated for a Nobel Peace Prize in 1901 and again posthumously in 1912.

Stead continued to preach âpeace through arbitration until 1912, when he boarded Titanic to take part in a peace congress at the Carnegie Hall in New York. A family friend wrote after the disaster that Mr Stead was âa great and noble man, full of merit and unforgettable.â The only news of his death received was a newspaper report that a lady saw a
courageous old man on the deck, quietly and calmly helping to put women and children into lifeboats. Another witness saw him jump into the sea. He was always a good swimmer, but the water was so freezing...