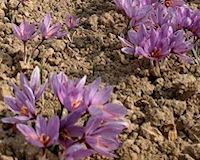 Fagan's hovel was based in the most squalid area.

Description: Saffron Hill is an ancient thoroughfare between Farringdon Road and Hatton Garden, deriving its name from being the location of great gardens of saffron which were grew on an estate here, long disappeared.

Charles Dickens in Chapter 8 of his 1837 novel Oliver Twist, has the Artful Dodger leading Oliver into Fagin's den - it was situated in Field Lane, at the southern end of Saffron Hill. He quotes a dirty and more wretched place he had never seen. The street was very narrow and muddy, and the air was impregnated with filthy odours.

And then in Chapter 26 he gives us a vivid picture of Victorian Saffron Hill Near to the spot on which Snow Hill and Holborn Hill meet, there opens, upon the right hand as you come out of the City, a narrow and dismal alley leading to Saffron Hill. In its filthy shops are exposed for sale huge bunches of second-hand silk handkerchiefs, of all sizes and patterns; for here reside the traders who purchase them from pickpockets. Hundreds of these handkerchiefs hang dangling from pegs outside the windows or flaunting from the door-posts; and the shelves, within, are piled with them. Confined as the limits of Field Lane are, it has its barber, its coffee-shop, its beer-shop, and its fried-fish warehouse. It is a commercial colony of itself: the emporium of petty larceny: visited at early morning, and setting-in of dusk, by silent merchants, who traffic in dark back-parlours, and who go as strangely as they come. Here, the clothesman, the shoe-vamper, and the rag-merchant, display their goods, as sign-boards to the petty thief; here, stores of old iron and bones, and heaps of mildewy fragments of woollen-stuff and linen, rust and rot in the grimy cellars.

The street was known as Gold Lane in medival London, but a Bishop of Ely was responsible for the name change, after planting valuable saffron crocuses here in the gardens of Ely Palace. The powerful Bishops of Ely were based in the country up in Saffron Waldon in Cambridgeshire.

Rachel Lichtenstein wrote in her book Diamond Street: The Hidden World of Hatton Garden that Each subsequent Bishop added to the estate until by the fifteenth century it included: a large stone gatehouse with a great hall and chambers, a private chapel called St Etheldreda's, stables, several acres of vineyards, pastureland covering 58 acres, cloisters and beautiful walled gardens, famed by medieval chroniclers for the quality of their strawberries and fields of crocuses.