The Ugliest Building in London 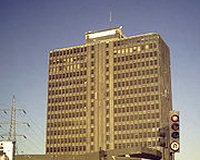 This tower block has twice been voted ugliest building in London

Description: Colliers Wood is dominated by this, the 19-floor Colliers Wood Tower. It was originally occupied as the headquarters of property company Ronald Lyon Holdings, and initially called Lyon Tower but has also been known as The Vortex and the Brown & Root Tower.

It was voted the ugliest building in London in a 2006 BBC poll and one of the 12 ugliest in the UK in a 2005 Channel 4 poll for its programme Demolition.

When it was being built, the tower reached the third storey before an error in construction was discovered and it was demolished to begin again.