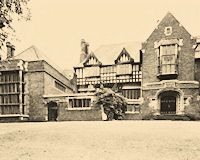 This is where Cruella's house was in 101 Dalmations.

Description: Sarum Chase is a Grade II listed neo-Tudor mansion built in 1932 as the home and studio of portrait artist Frank O. Salisbury.

It was described by Nicholas Pevsner as pure Hollywood Tudor.

The architect was Frank's nephew, Vyvyan Salisbury. Frank's wife cut the first sod on 4 September 1932 and they moved in on the 4th July 1933.

On his death in August 1962, the house was bequeathed to the British Council of Churches, but they sold the mansion and auctioned its contents.

On 7 June 1968, it was the setting of a photoshoot for The Rolling Stones, for their Beggars Banquet album, by photographer Michael Joseph.

It also appeared briefly in Disney's live-action movies 101 Dalmatians and 102 Dalmatians as the exterior of Cruella De Vil's home.

Today it's a private residence.