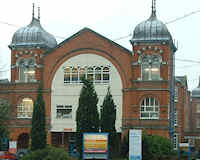 This is where David Beckham and Jonathan Ross were born.

The hospital is geographically close to the site of the 2012 Olympics, has one of the largest and busiest A&E departments in the UK and serves a diverse community from Wanstead, Chigwell, Walthamstow and Leyton.

An infirmary was built here at Whipps Cross for the Leytonstone Workhouse, construction started in 1900 and was completed in 1903. When it opened the infirmary provided 672 beds in 24 wards in four awe-inspiring symmetrical blocks with tiered covered walkways and two massive towers. The buildings cost 186,000 to construct, which was criticised as extravagant at the time.

By the end of World War I in 1918 the infirmary had started to become a general hospital and the name was changed to Whipps Cross Hospital.

1» I am trying to find when West Ham Borough Council took over responsibility of running the hospital from the Poor Law Authority. Help please? (Leslie Fenn)
Posted by Leslie Fenn on 2009-09-30

The discovery of Penicillin», 8.6km