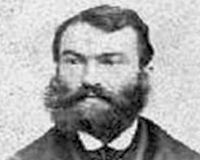 This is where pioneering doctor James Parkinson lived.

Description: Hoxton's most famous GP James Parkinson (1755-1824) worked here from his family home on the south-west corner of Hoxton Square (the current building dates to the early 20th century). He lived here with his wife Mary and their six children.

He was a noted apothecary, geologist, paleontologist, and political activist, famously writing An Essay on the Shaking Palsy. In it he was the first to describe paralysis agitans - later it would be renamed Parkinson's disease by Jean-Martin Charcot.