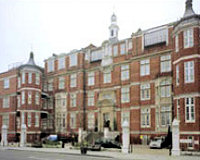 Description: The world's first hospital dedicated to the treatment of cancer, was founded in 1851 by Dr William Marsden as the Free Cancer Hospital after the death of his wife.