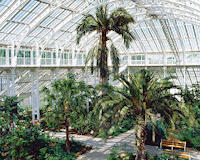 Description: Kew Gardens is one of London's top tourist attractions, World Heritage Site, and houses the largest and most diverse botanical and mycological collection in the world.

Dating back to the 18th century, its birth was an exotic garden at Kew Park by Lord Henry Capell (an MP in the 1660's) of Tewkesbury. William Chambers built several garden structures including the famous Chinese pagoda built in 1761 which still remains. The royal estates of Richmond and Kew were merged together in 1772 and George III enriched the gardens, aided by horticultural experts William Aiton and Sir Joseph Banks.

The Palm House was built by architect Decimus Burton and iron-maker Richard Turner between 1844 and 1848, the first large-scale structural use of wrought iron.

The larger Temperate House, followed later in the 19th century, the largest Victorian glasshouse in existence.

Master landscape architect Capability Brown famously applied for the position of master gardener at Kew and was rejected.

Kew Gardens has its own police force, the Kew Constabulary, which has been in operation since 1847.


Tours: The Herbalist Tour of London