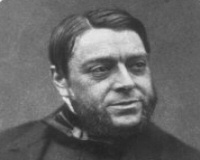 Description: Philip Henry Gosse (1810-1888) lived here, he was a zoologist who championed a rival theory to his contemporary Charles Darwin.

His theory was that all that evidence of ancient Earth had been created only around 6000 years ago, because God had thought it reasonable to create the Universe as if it had had a history.

This theory was inspired by old conundrum of whether or not Adam and Eve had navels, since they had not been born in the usual way. Philip Gosse decided that they had been created with navels, because that's what they ought to have had, and he extended this view to the Earth and the entire Universe.

Ingenious though it was, it was universally dismissed, much to Gosse's chagrin.

He was born in Worcester in 1810 and as a boy worked in the counting house of the firm of George Garland and Sons in the town of Poole. In 1827 he went to Newfoundland as a clerk in the Carbonear premises of Slade, Elson and Co. He left Newfoundland in 1835 for Compton, Lower Canada where he farmed for three years. He then taught briefly in Alabama and returned to England in 1839.

On his return to England, Philip married Emily Bowes, a devout Christian who wrote sixty gospel tracts that have passed through many editions and have been widely circulated. She died a painful death at their London home, and was no longer able to assist with her husband's trips to their St. Marychurch seaside villa to study his great passion â the marine world. Philip never recovered from the loss, published a book mourning her last days on earth, and following her burial at Abney Park Cemetery in Stoke Newington, moved more permanently to Devon.


The Museum of Garden History», 3.6km