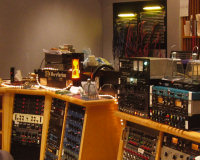 This is where Iggy recorded the seminal album Raw Power.

Description: Whitfield Street Studios originally opened here in 1965. Its three studios and seven mastering suites housed within its purpose-built complex occupied a significant place in the annals of popular music and also had major continuing importance in the arenas of pop, rock and dance as well as classical, orchestral and film soundtracks.

A glance at the history of the studios reveals a deep and abiding association with artists from Jimi Hendrix to Madonna, from The Who to The Prodigy, from Iggy & The Stooges (recorded Raw Power here) to Charlotte Church.

Plus landmark producers and engineers such as William Orbit, Fred Jerkins, Brian Eno and Mike Ross-Trevor all conjured up aural magic from behind the faders.