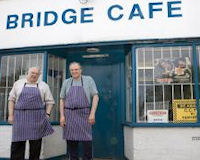 This is where The Apprentice losers are sent to ponder.

Description: The Bridge Cafe, with its prison-cell feel and shabby exterior, is where the ruthless candidates from BBC's tv series The Apprentice are regularly dispatched to when they have failed to win their tank.

Gerry and Frank Marcangelo have been offering workers in this neighbourhood traditional sustenance for almost five decades and have come to know their customers extremely well.

They are down-to-earth working men - and what the working man wanted to eat 50 years ago, they still eat today, argues 65-year-old Gerry. People are not interested in us changing.

We tried different things over the years, such as salads and healthy things, but we have always gone back to do what we do best.

Gerry gestures towards a posh coffee machine standing redundant in the corner.

They don't want it, he says. Tea is the brew of choice here.

2» The Bridge Cafe Brothers It is 50 years since the brothers began the cafe with Mr Marcangelo, (their father) Gerry and I have been friends for 55years and once took 7/1 on Cassius Clay to beat Sonny Liston before he become Mr M Ali. We have seen the changes to the area and of course the cafe. It is very handy for the Apprentice people to get to, but as for whom the winner will be we have as much idea as the watcher, basically none. You can now look up the Bridge Cafe mug sales on the internet and buy either a White Bridge Cafe mug or a grey Bridge Cafe Travel mug keeping drinks either hot, or cold. With regard to our friends talk of decorating there is a new low-level ceiling while other changes are forth-coming. (Long-time friend to both brothers and sleeping partner, at least Im usually akip in the corner most days, or singing) Peter Mac Murray (Peter Mac Murray)
Posted by Peter Mac Murray on 2012-02-15
1» Its a funny old world,I sit and watch the apprentice and when they get sent to the cafe I say to my family I think that is the cafe I used to use ..... Not so strange? .... But the last time I used it was in 1964 when I was 8 years old, dancing the twist to bits and pieces (Dave Clark 5) in front of the lorry drivers for a tanner for the jukebox and some of the pickled onions from the big jar on the counter .... I moved from London in 1965 and have never returned and now live on the coast ..... but how did I recognise that cafe after 47 years? .... weird! .... Maybe you need to re-decorate .. lol (Trevor Drake)
Posted by Trevor Drake on 2011-07-31