The Lost Zoo of Walworth 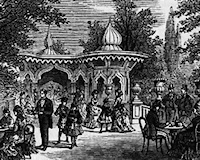 Description: Around 1831 Pasley Park (also known as Surrey Gardens) contained some of the first wild and exotic animals in England. Rhino, elephants, snakes, leopards and the first giraffes ever in the UK could be seen at the Royal Surrey Zoological Gardens.

Established by Edward Cross, this now forgotten 18 acre park was home to a 12000 capacity music hall, and 30 years of panoramas - lavish and extraordinary themed outdoor spectaculars featuring erupting volcanoes and even Napoleon crossing the Alps and the City of Rome.

The grounds were laid out by Henry Phillips, author of Sylva Florifera, and were extremely beautiful and varied. At its peak the gardens brought in up to 8,000 visitors a day paying a shilling each. It was a favourite of Queen Victoria and the Royal children and even General Tom Thumb performed there!

Today very little remains of this extraordinary history, the animals were sold off in 1855, the grand music hall destroyed by fire in 1862 and the park finally closed in 1877.

Surrey Gardens was developed in the 1950's as it stands today.

Artefacts from the Royal Surrey Zoological Gardens can be seen at the Lost Southwark exhibition currently showing at the Cuming Museum on Walworth Road.

Its locally rumoured that on summer nights the faint ghostly sounds of lions and bears can be heard! 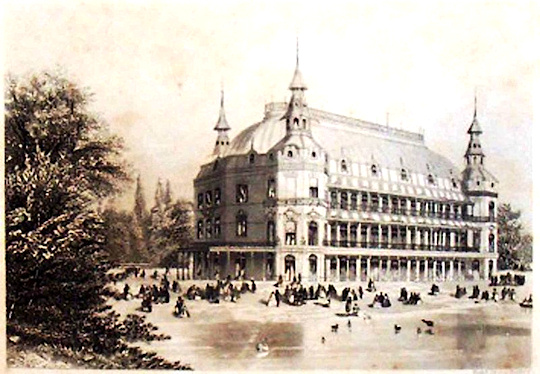 The Lost Zoo of Walworth», 0km

The Rose and Punchbowl», 3.1km